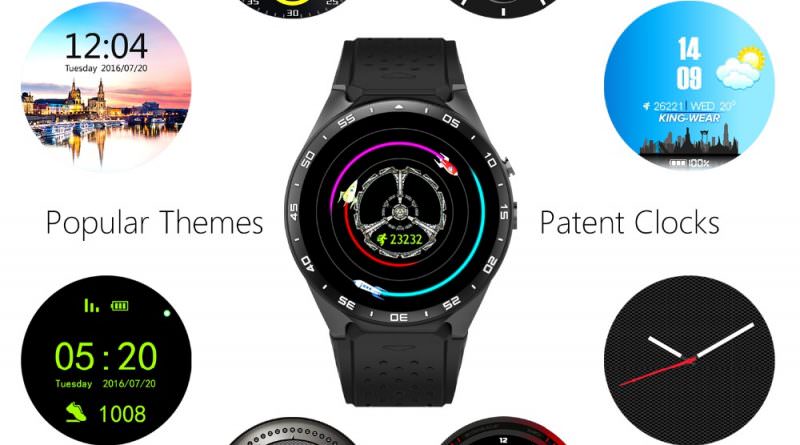 Today we will again talk about smart watches from China, but not about some cheap models there, but about a rather expensive representative. Meet us on our review of Smart Watch KingWear KW88. The decision, of course, is not a brand segment, but not quite budgetary either. The fact that the clock is higher than any other Chinese smart clock says not only their price, but also the placement of this model in the official line of the Chinese brand LEMFO.

The watches got a good design by the standards of the Chinese market, they were collected quite qualitatively, and the functions are not deprived. Are they good? Let’s understand.

Before you start reviewing the clever KingWear KW88 watch, the first thing we’ll look at is the technical specifications, so to speak, to understand what we are dealing with.

Trying to make Smart Watch KingWear KW88 as attractive as possible to the user, the manufacturer started with packaging. Apparently, the company adheres to the rule that sales largely depend on a beautiful wrapper. And, I must say, they chose the right path. The KingWear KW88 box is made of very dense cardboard, stylized under the skin. It looks really cute and expensive, especially in photos on the Internet. Of course, the box can be damaged during transportation, which will spoil the impression of unpacking.

When the user opens, they meet the clock in a small bag. Below them are two small boxes into which the manufacturer has placed the rest of the delivery. In one of them is a 4-pin magnetic cable charging and data transfer. Some sellers put two such wires, and, given their prevalence, this is definitely a plus.

In the kit are (depending on the seller) pretty good wireless headphones that connect seamlessly to KingWear KW88 – you can listen to music on the go without getting a smartphone. In addition, there is a small cross-head screwdriver, which is necessary to open the cover of the nanoSIM compartment. A nice addition is the film on the screen, in addition to the one that has already been glued. Well, the standard is present user manual. Looks simple, only in Chinese and English, but with pictures.

By design, the KingWear KW88 is close to a classic clock with a round dial, but larger ones. The main part, that is, the edging, is made of aluminum, according to the manufacturer – anodized. On sale there are several colors: gray, gold, silver and pink gold. The front part was occupied by a round screen framed by a border, on which there are marks in the form of time intervals. The display KingWear KW88, unlike most Chinese smart watches, is deprived of huge frames around. This is the sin of some smartphone manufacturers. On the right side there is a power button, which is made in the form of a wheel, but it reacts to pressing.

A little lower we have a camera eye at 2 megapixels. Closer to the place where the strap is fastened, one can see the opening of the spoken microphone. On the left there is only a speaker, about which there are holes. Given the design, we can say that the KingWear KW88 is not waterproof. The back of the black plastic. Reviews of KingWear KW88 say that the lid often bursts. There are screws at the edges. In the center there was a heart rate sensor, just to the right – contacts for recharging the device. There is also a slot under the SIM-card, which is covered with a plastic plug, fastened with a screw.

Smart watches KingWear KW88 turned out very cute. On the arm, they look great, they also sit. Unlike cheap models, they are felt by the clock, not by mini-smartphones. The build quality is at a high level, there are no sloppy joints, no dangling elements. Yes, there are devices with a defect, but tell me which company managed to completely get rid of the marriage?

Nevertheless, we are talking about wrist watches, so the strap should not be the last one. The manufacturer did not come up with a bicycle, presenting 3 variants of a silicone strap: black, white and red. The mount is the most usual, to which we are accustomed since the time of Chinese watches with digital dials. Not original, but reliable and convenient. And in general, the strap is very good. It bends well, has a rough surface, which makes it fit better to the hand.

I do not think that someone will easily tear it apart, although the cases were following the reviews about KingWear KW88. And here one of the minuses of these clever clocks opens. The straps are non-replaceable. The reason for this was the GSM module, which the manufacturer placed in the strap, apparently due to metal in the construction, which is poorly transmitting the signal. That is, the strap was torn – the clock was left without the support of nanoSIM. Of course, someone can and will manage to find a way out, but you will have to find a similar strap.

Smart watches KingWear KW88 received a very good display. Installed AMOLED-matrix, which are famous for their saturated black color and low power consumption. The diagonal is 1.39 inches, the resolution is 400×400 pixels. The picture is clear, there is no grain. The screen is bright enough to use the clock on the street in bright sunshine. OGS technology is used, which ensures that there is no air gap between the glass and the display itself. Thanks to this, you do not have to do a few touches to open the desired application. It’s safe to say that KingWear KW88 got one of the best screens among Chinese representatives.

As a rule, smart watches, and especially Chinese “state employees”, can not boast of a powerful “filling”. Still, these are miniature devices, in which it is problematic to install a productive processor and a large amount of memory, and this is not necessary for every user. However, KingWear KW88 is pleasantly surprised.

The smart clock is based on the processor from MediaTek – MT6580. Yes-yes, the same chip, which is still often put in smartphones of the lower segment. It is 4-core, has a built-in communication module, supports the 3G standard, the main emphasis is on energy efficiency. The graphical core is Mali-450. Also not the first freshness, but for the clock a real find. Supports resolutions up to HD. Performance MTK6580 is comparable to what the budget SnapDragon 400 demonstrates.

Equipped with KingWear KW88 512 MB of RAM, which is very good for smart watches. The storage is designed for 4 GB. Expanding the permanent memory does not work out – a slot for microSD is not provided. Although this is enough, given the tasks that are usually performed on a smart watch.

Smart Watch KingWear KW88 received a 2 Mp camera, which is located on the right end. As far as it is convenient, it is difficult to say. The camera, of course, takes pictures at the level of Nokia phones ten years ago, and it will not be used by everyone, especially if we take into account what cameras of modern smartphones are capable of. Superfluous it may not be, but do not install its manufacturer, a smart clock would not have lost much.

This certainly is not the strength of KingWear KW88, and indeed, few smart watches boast of high battery capacity. The battery is set to 400 mAh, which is normal for Chinese watches, but only on paper. In practice, capacity is not enough for active operation. At not most active use KingWear KW88 will live at the best of 1.5 days. Smart watches are charged, as already said, by means of a magnetic connector, the time of full charging is just over an hour.

Operating system, connection to a smartphone

Working smart watches KingWear KW88 on Andoid 5.1. This is the “pure” Android, not Wear, which is famous for branded devices. The system is slightly curtailed, but this did not affect the comfort of the work. In fact, we have a very small Android-smartphone with all the consequences. Smart watches are adapted to gestures, which you quickly get used to. “Out of the box” is the Play Market, which allows you to install everything that your heart desires. Of course, do not forget about a small display and not the most productive hardware.

And although smart watches can work fully without connecting to other devices, many will be interested in additional features. KingWear KW88 can be interfaced with smartphones running both Android and iOS. To do this, use the “Mobile Assistant”, the function is in the smart clock settings. We select the item, then the operating system of the smartphone. Then the barcode will appear, which must be scanned by the camera of the smartphone. By clicking on the link, you can download the application to your device. It is quite simple, but there is everything you need. After pairing, the user will be able to: remote control of the smartphone camera, remote control of the player, information about the steps passed, various notifications, the search function of the clock and several other possibilities.

What can they do?

As already noted, KingWear KW88 is a miniature smartphone. Therefore, all relevant functions are available to the user, from calls to browsing the Internet. I think no one will arise with this question. Quickly walk through the capabilities of KingWear KW88 just like a smart watch.