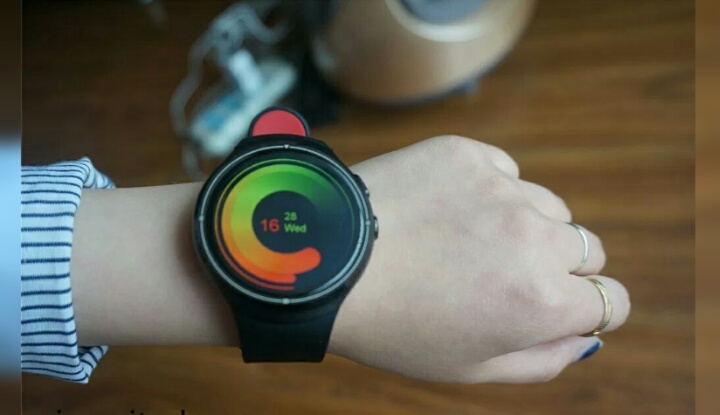 Review of smart watches Zeblaze THOR – watches that are worthy of God!

The best model of Zeblaze smartwatches with Super AMOLED screen is Zeblaze THOR.

Despite all the innovations Apple Watch, the products of Chinese craftsmen will always be a level higher. Constantly there are new smart-hours, however only some of them manage to make a resonance in the world market. Currently, the models of Chinese smart watches can be called Blitz and Crystal models from Zeblaze, D5 and F2 from No.1, Amazfit from Huami.

But what if we say that there are such smart hours that outperform all existing ones? Smart Hours that are even better than your smartphone! Smart Hours that can easily compete with Apple and Samsung products (and these are the absolute leaders in the smart watch market). We are talking about Zeblaze THOR and about them our today’s review.

The Zeblaze THOR smarts are supported by SIM cards, a Super AMOLED display with a Gorilla Glass 3 protective glass and a metal case. And this is only a small fraction of what this smart-master can boast of.

Zeblaze pays attention not only to the characteristics of its devices, but also to their packaging, which makes an impression at first sight, if compared with more modest boxes Huami or No.1. As for the smart Zebase THOR, they are packed in a stylish leather box. A brilliant Zeblaze logo flashes in front. It seems to us that Zeblaze packaging is the most beautiful and high-quality among all Chinese manufacturers of smart watches. Other companies rarely care about this nuance, sending their products in plastic boxes. In terms of packaging, Zeblaze exceeds all expectations, and yet we have not yet reached the smart hours themselves. 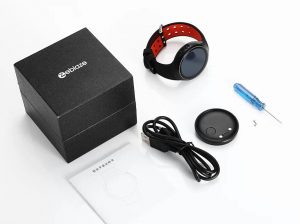 Please note that Zeblaze did not spare additional accessories and details to the smart THOR clock. Besides these you will also find in the box:

Zeblaze has a great sense of style. Its smart hours are distinguished by high-quality assembly and fashionable design. We believe that in this regard, smart watches Zeblaze confidently compete with Apple watch.

The metal case of smart watches Zeblaze THOR is made of 316L stainless steel. The finish of the case is simply gorgeous. It was created by the method of computer casting (CNC), as in the case with smartphones. The company states that for the production of each THOR case it is necessary to perform 30 operations with a total duration of 72 hours. However, from ourselves we note that the process of computer casting is almost identical for any goods. And yet, this does not exclude the fact that thanks to CNC, the smart Zebase THOR watches look more expensive and give the user completely different tactile sensations. 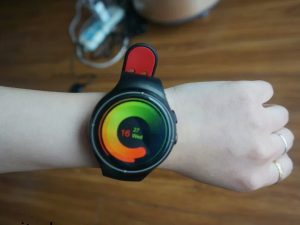 Bezel around the screen is very narrow, the display has almost no black frames. Although, in some ways it seems that when developing Zeblaze THOR designers were inspired by the hours of Huami Amazfit. This is indicated by a two-color strap and rounded edges of the case. True, the color of the body is only one – black metal. Strap – plastic, perforated and hypoallergenic. 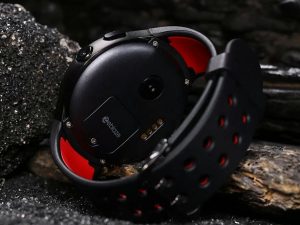 From the left side of the case there is a speaker and a microphone. From the right – built-in camera and power button. 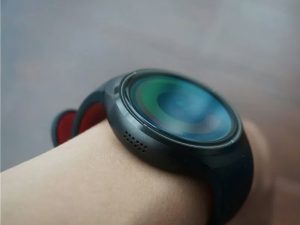 Honestly, even from the coolest smart-drives you should not expect high performance, as on smartphones. Simply because it is primarily a watch that initially develops the most energy-efficient, since a physical battery can not physically fit into their case. Therefore, instead of the powerful Helio X27 or P20, the smart Zebase THOR clock runs on the budgetary MTK6580M processor with a shy frequency of 1 GHz. The situation is saved only by its 4 cores, while the majority of other independent smart-hours still work on 2-core chips.

To improve multitasking and increase the memory capacity of “Tor Torch”, Zeblaze equipped them with gigabyte RAM and 16-gig ROM. Alas, these smart clocks do not support external SD memory cards, although it seems to us that 16 GB of internal memory will be more than enough for both the clock and the user.

The undoubted advantage of smart watches Zeblaze THOR are their wireless capabilities. Here you will find both WiFi, and Bluetooth with GPS, and, of course, a radio module for 3-generation (3G) cellular networks. A standard size SIM card is inserted in the back. 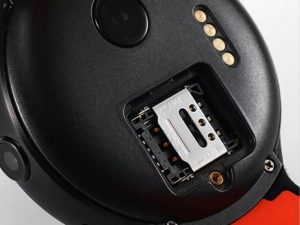 The clock confidently supports all connections. Using them, we never noticed the breaks of communication, on the contrary, there was even a feeling that you are using the phone. 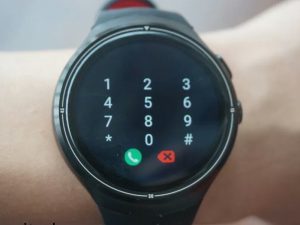 And now we turn to the pride of the smart Zebase THOR clock – to their stunning screen. In comparison with other models, for example Zeblaze Blitz or No.1 G6, the screen of “Torah watches” is much larger – as much as 4 cm in diameter (1.6 “).

The screen resolution is 400×400 with a density of 326 dots per inch. In this regard, smart watches Zeblaze THOR leave their competitors far behind. The owners of the clock Apple Watch, Samsung Gear and No.1 D5 + (the previous record holder for the screen resolution) nervously smoke on the sidelines. 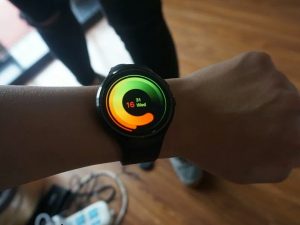 The Zeblaze THOR display is manufactured using the “super AMOLED” technology, so the image is very high quality, and the screen consumes less energy.

The colors on the Zeblaze THOR display are impressive with saturation, the brightness is quite high. On the street, the image on the screen is clearly visible. And all thanks to the uncompromising “Super AMOLED” technology. This is just what you need for the screens of phones and watches, although it is more expensive, but it’s worth it.

In other words, the clever Zeblaze THOR watch offers the best screen in the world in its price category.

Because THOR is an independent smartwatch, so they run a full-fledged operating system, or rather Android Lollipop (version 5.1). 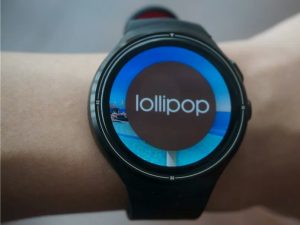 The downside is that this is an old operating system, some Chinese smartwatch have long been working on Android 6. However, the good news is that developers Zeblaze profoundly altered the operating system to make it ideal for the management of smart watches.

Curiously, the developers even left the Google Play catalog in the firmware, although not all applications support the resolution of this clock (400×400 pixels). For example, Asphalt 8 or NFS Most Wanted games refused to run on Zeblaze THOR. Also, due to the limited amount of RAM, it is undesirable to run more than 5 applications at the same time, otherwise the clock starts to hang. But on THOR smart-phones, basic applications, such as MX Player, PDF Reader and so on, work without problems.

Moreover, in these watches initially there is a bunch of useful functions. Even a pedometer and a pulse sensor are present.

Additional features, such as sleep analysis or reminder to move, can be obtained after installing the appropriate applications from Google Play.

To synchronize the clock with the phone, you can use the QR code from the instructions or simply connect gadgets via Bluetooth. 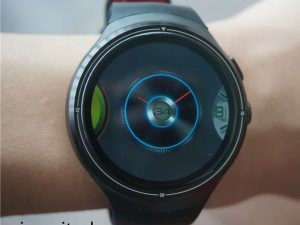 Of course, the smart clock Zeblaze THOR provides different styles of dials. It can be seen that the developers have tried very hard, thinking through the design of the “Tor Torah” interface. There are several preset styles, and the rest can be downloaded separately.

Until now, the built-in camera in smart-hours is considered a rare rarity, because manufacturers mostly try to allocate free space for the battery. Therefore, the cameras are not installed. However, this does not apply to the smartwatches of Zeblaze THOR. This device boasts its own camera and remote control function of the smartphone’s camera.

The built-in Zeblaze THOR clock camera takes pictures with a resolution of 2 megapixels (with a digital zoom of up to 5 megapixel). Photos look cool not only on the small screen of smartwach, but also on larger displays. Shooting in daylight will generally be gorgeous. 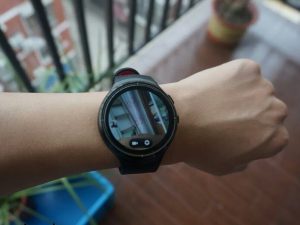 Its flagship smart watch company Zeblaze has equipped a powerful battery for 350 mAh. Since the remaining elements (screen, processor, RAM) are not too gluttonous, then you can count on: 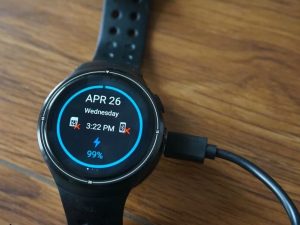 For charging from 0 to 100% it takes more than an hour, but we think that this is justified, given that the next charge will take at least a day. Also, we recommend that you order two chargers at once, because in the event of a breakdown, finding a replacement will not be so easy. 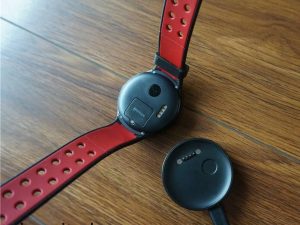 Obviously, in terms of battery life, the smart hours No.1 F2 still have no competitors. But even with 3G, Wi-Fi, GPS, heart rate monitor, Super AMOLED screen and 4-nuclear chip, the smart Zebase THOR clock with a battery of only 350 mAh manages to work longer than many other smart watches and phones!

If you want to buy an independent smart watch with 3G, elegant design and excellent build, then, despite the high price, the best choice for you will be Zeblaze THOR. At the moment, this is one of the most sophisticated Chinese smartwatches. Of course, the price tag of $ 109 looks impressive for watches from China, but it is justified by a rich set of functions and worthy characteristics.