Apple Watch – wristwatch with additional functionality (smart clock), created by Apple and presented September 9, 2014. For their full work requires a smartphone family of iPhone 5 or newer.

The second generation of the Apple Watch Series 2 was introduced in September 2016. 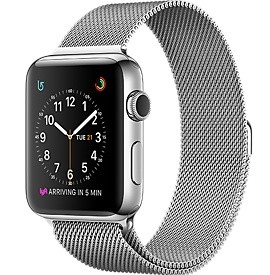 Controls: The watch is equipped with a circular wheel Digital Crown on the side face and an elongated rocker button below it. The wheel is used for scrolling or zooming in; Clicking on it allows you to return to the home screen. The rocking-button serves for calling 12 selected subscribers, who can call or send a message (if the right person is not there, you can go to the second method of searching it – in the phone book, rotating Digital Crown).

On the left side – slots of the speaker and microphone. Photodiodes for pulse measurement can be located on the underside of the clock. For the vibration is responsible drive linear movement of the Taptic Engine, its impact (on receipt of notices, etc.) is similar to an easy tapping on the wrist.

The clock does not have connectors, the battery is recharged (capacity 205 mAh) using an inductive adapter with magnetic clamps. It is recommended to charge the watch every day, full charging lasts about two hours; The battery will lose no more than 20% of the original capacity per 1000 recharge cycles. In one of the grooves there is a technological port, covered with a plug (its purpose is not yet known – it is assumed that this connector is for accelerated charging, which can be used later).

In Apple Watch there is no usual PCB, instead of it is used the so-called “system-in-the-box” (SiP, System in Package) Apple S1 (all the elements necessary for the work of the watch are packed in a small metal “box”, the processor, the chip RAM, chip NAND flash memory, sensors). In the clock built-in storage capacity of 8 GB, of which the user is available slightly more than 6 GB.

No cameras, but the device can be used as a remote viewfinder iPhone. Own GPS-receiver for the original series of watches is not (added in Series 2), they use the navigation resources of the phone, communicating with it via Bluetooth 4.0 and Wi-Fi 802.11b / g.
The watches have an NFC interface and allow you to make contactless payment using the Apple Pay system.
There is a gyroscope and an accelerometer.

According to the specifications, the watch conforms to the IPX7 standard and is capable of withstanding a 30-minute immersion in water up to a depth of one meter.

The operating system watchOS has an interface reminiscent of that in iOS, but with round icons.

Dialing SMS – using voice dictation (Russian is recognized), the normal keyboard does not fit on a small screen. You can use a ready-made template.

Built-in fitness tracker (analog Fitbit) – pulse measurement, counting steps and calories. Taptic Engine allows you to send to other owners of hours from Apple a set of “touches” or your heartbeat.

Assistant Siri (called by pressing and holding the wheel).

Mail client with limited functionality (the text of some letters it shows completely, and when you try to read others it advises to open the iPhone and run the corresponding application there). You can not reply to a message using a clock, you can only delete it, mark it as unread, or check the box. 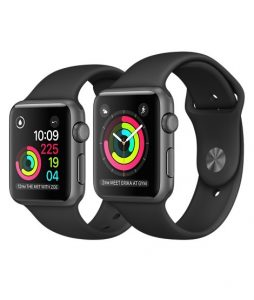 There is no browser in Apple Watch, dialer too.

In Apple Watch, you can “pour” up to 2 GB of music. Apple Watch is not intended for gaming use.

In January 2015, a number of companies, including TapSense and InMarket, announced plans to launch hyper-local advertising watches on displays.

When you turn on the clock immediately asked to join their “relative”, the phone iPhone – are asked to bring the camera smartphone to the image on the screen Apple Watch. Then, all applications installed on the iPhone and adapted for the clock are transferred to the device. Connection of two devices is via Bluetooth. In addition, Apple Watch can communicate via Wi-Fi if both devices are connected to the same wireless network.