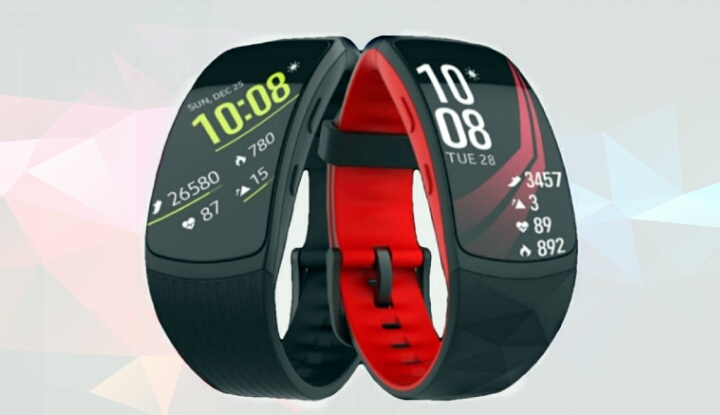 Soon, Samsung will introduce a revolutionary hybrid of smart-hours and a fitness tracker …

Almost immediately after Samsung lighted up the name “Gear Fit2 Pro”, on the Internet appeared long-awaited images of the new wrist device, which gave interesting information about its functions.

As it turned out, the model Fit2 Pro, unlike Gear Fit2, will be able to fully control the navigation due to watertightness at 5 ATM. Also, the hybrid will synchronize the data with the popular platform for swimmers “Speedo On”.

One of the main advantages of the fitness hybrid was the built-in GPS, but most of all we were intrigued by the claimed ability to play music in Spotify without the Internet. The only wrist unit, where there is such a function, is the smart clock Samsung Gear S3. Thus, Gear S3 and Gear Fit2 Pro have left far behind the owners of other devices on Android Wear and even Apple Watch. There certainly have their own solutions for listening to offline music, but not through Spotify.

As for the Fit2 Pro, here it is worth noting a more reliable buckle of the strap. The hybrid will hold tightly to the wrist under any circumstances. It is also reported that buyers of Gear Fit2 Pro will receive an annual subscription to Under Armor, but unfortunately there are no details about the price or the release date of the device.

Recall that just the other day on the official website of Samsung appeared the name “Gear Fit2 Pro” with the model code “SM-R365”, which earlier in June approved in the US Federal Communications Commission (US FCC). And in January, Samsung applied for the registration of the name “Gear Fit Pro”.

Now we can only wait, when Samsung decides to release this mysterious novelty. I want to get answers to all questions as soon as possible. For example, about the word “Pro” in the title. Probably, Samsung is preparing to offer advanced health monitoring in the new sports device? Maybe finally Samsung will put into practice the “bio-processor” released in 2015, capable of measuring the pulse (by the method of PPG), skin temperature, galvanic reaction and the degree of obesity.

It is expected that similar technologies will be used in the wrist device Samsung S-Patch 3, which also recently was seen on the FCC lists. Last year, Samsung demonstrated a prototype S-Patch, which can constantly record the pulse using the ECG method, which is close to the clinical level of heartbeat monitoring.

Given that the device Gear Fit2 Pro is already mentioned on the official website of Samsung, we hope that it will be shown in the very near future.

For comparison, the fitness tracker Gear Fit2 was released in June 2016, and soon the IFA exhibition will open, where Samsung usually demonstrates new models of smart watches Gear S, so you can also count on the official display of Fit2 Pro.